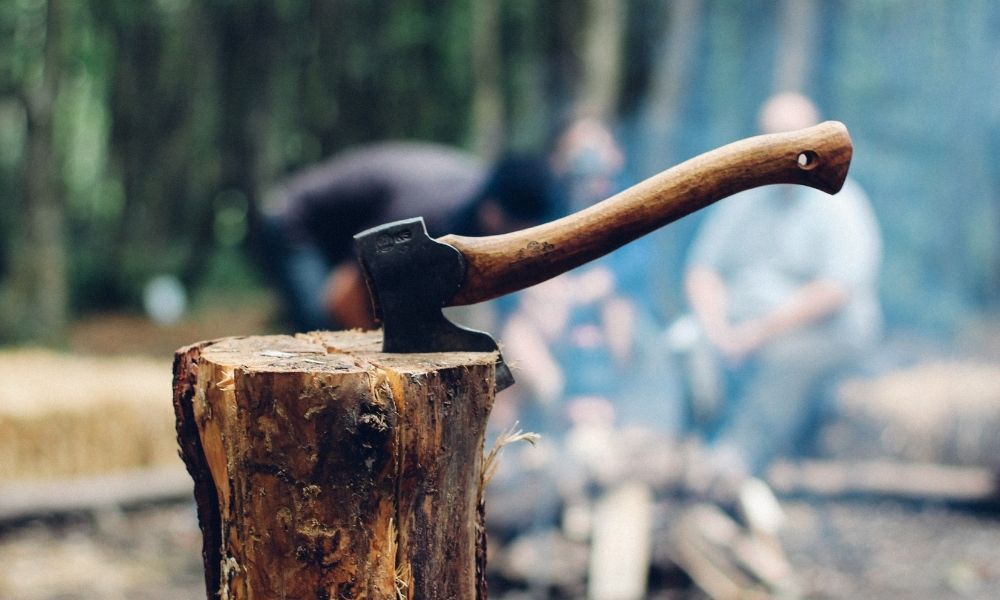 In this article I’ve listed 28 of the most commonly known axes – and a few more obscure ones – with some notes on their uses… Just in case there are people out there like me who think about this kind of stuff!

The unstoppable rise of the mighty axe

An axe is one of those tools that has stood the test of time. More than 30,000 years since the stone age first spat out the humble axe, they are still being used to this day and they haven’t really changed all that much.

Sure with modern manufacturing they have been refined to a degree but they are still basically a handle with a sharp bit attached to it for chopping stuff. The humble axe is here to stay.

Behold! 28 of the mightiest axes that ever graced gods green earth…

When most people think of an axe they’ll probably picture a felling or chopping axe. These are medium to long length axes used to chop down trees. They have a thin, sharp blade which cuts deep into the wood fibres to facilitate the felling of a tree.

Splitting axes are long handled axes with a heavy, wedge-shaped head designed to split logs along the grain with one big swing. The blade is duller than that of a felling axe – it doesn’t need to be razor sharp – just get it swinging and let gravity do the hard work.

Much like a felling axe, a Forest Axe is used for cutting down large trees or branches and limbing small logs.
Forest Axes have a long, rounded edge with a flat elongated axe head. A classic axe.

The Double Bit Axe has a two sides for cutting rather than a poll on the back of the head like a standard single-bit axe.
One side can be sharp for chopping and cutting, the other side duller for splitting. Two for the price of one!

A Maul, also known as a splitting maul, block splitter or sledge axe is a heavy, long-handled axe used for splitting logs along the grain. One side of the head has a wedge-shaped axe the other a sledgehammer. These are employed for the biggest of splitting jobs.

A Miners Axe typically has a shorter handle than a standard chopping axe but with a similarly weighted head, making it quite an unusual beast. Miners Axes were used for installing bracing timbers so we can speculate that the design is due to space constraints in old mine shafts.

Carpenter’s axes are smaller, usually slightly larger than a hatchet. They are used for traditional woodwork and joinery.
The beard of a Carpenter’s Axe is usually more pronounced and also features a finger notch to allow you to choke up on the handle for more precision.

The poll is often used for hammering so you don’t have to switch between axe and hammer while you work. Handy!

A small one-handed axe used for chopping, kindling firewood, and stripping small branches from trees.
Ideal for camping, hiking and backpacking due to their handy size. A must-have outdoor accessory.

American pattern axe designed in the Hudson Bay region. Known by their oval shaped eye, flat poll and 2lb head with a curved Hickory handle. A classic piece of US design.

Hewing is the art of chipping away the natural rounded surface of a log to square up wooden beams for framing purposes. Hewing Axes – also called Broad Axes – have a wider blade than a standard axe. Depending on the size of the job, a large or small hewing axe can be used.

A Boys Axe is significantly smaller and lighter than a full size axe, but larger than a hatchet.
Easier to wield and often used as a starter axe. These are for light work. (Disclaimer: Also for girls)

Often associated with axes used in the Viking era. The lower portion of the axe bit known as the beard, extends down in a curve below the butt of the axe head. This makes it ideal for intricate carving and precision cutting.

The Tomahawk is a small, light, single handed axe used by North American Indians as a tool or weapon.
Today, modern Tomahawks are commonly used in camping and bushcraft as an alternative to a hatchet as they are generally lighter and slimmer. Good for throwing too!

A Pulaski Axe is a tool which combines an axe blade on one side for chopping and an adze (See below) on the other side for digging or scraping. Also commonly known as a Firemans axe.

A modern Tactical Axe is used by military enthusiasts in the field for cutting, chopping, splitting, digging, prying or even cutting rope. Basically anything that an edged tool can be used for. It’s small, light and they usually include additional features as would a swiss army knife.

Throwing Axes have been used for centuries as a weapon, nowadays axe throwing has become a popular and growing sport. Throwing axes come in all sizes but generally hatchet-sized axes are thrown overhand towards a wooden target for points, much like darts.

Also known as a Grub Axe, the Cutter Mattock is similar to a pickaxe but with a stout vertical axe blade on one side and an adze on the other. Mainly used for tough agricultural duties such as digging, chopping, prying and hoeing.

An adze is an old and versatile cutting tool that has been used since the stone age. Similar to an axe but with the cutting edge rotated round 90 degrees much like a hoe or the back of a claw hammer.

Generally used for agriculture and horticulture, and also carving and shaping wood.

A Shingling Hatchet’s cutting edge is used for splitting wood shakes/shingles and is equipped with a notch in the blade for extracting nails. A hammerhead is opposite the cutting edge for handiness..

A lumberjack axe – also known as a competition axe or Racing axe – is a custom-made axe for chopping fresh, knot-free white pine during Timbersports events. Most are manufactured in Australia or New Zealand by Brute Forge or Tuatahi and cost around $500.

Heigh-Ho! A pickaxe is a large T-shaped hand tool used for digging, prying and excavating. Both sides of the head are the same – a tapering pick. It’s harder to find a true pickaxe nowadays as most have basically become Mattocks with pick on one side and an adze type blade opposite.

A crash axe is used by police, firefighters, and rescue workers to assist with forcible entry of damaged vehicles and buildings. There are many different type of Crash Axe depending on the application.

A shepherd’s axe is essentially a long straight shaft much like a shepherds crook but topped with a light axe head instead. In older times these were used to navigate difficult terrain while keeping your flock safe from predators, and to assist with fire prep or shelter building.

An Ice Axe is a multi-purpose climbing tool used by mountaineers for summiting snow-covered peaks and glaciers.
For serious climbers the ice axe can be a life-saver if they find themselves sliding involuntarily towards a crevasse!
Also handy for casual hikers that may encounter snow or ice on their trek.

The Halberd was a two handed weapon used by foot soldiers in Europe around the 15th century.
The combined spear and battleaxe enabled them to engage armoured men on horseback with the spike and deliver a deadly blow with the blade.

Viking Long Axes were used to fight enemies from a safer distance than could be done with a hand axe.
This also kept them out of the enemies sword range. At close quarters, the long shaft would be used for administering blows and defending against shorter bladed weapons.

The Bardiche or “long poleaxe” was a 16th century medieval weapon primarily used for slicing at your enemies with the long, curved single blade. The tip could also be used for thrusting. The blade was commonly secured at two points on the shaft due to its length.

I wrote this article just to see how many types of axe I could find and I was quite surprised there were so many!
As you can see there are lots of different axes – some less common than others, but hopefully this has shed some light on why there are so many and what each axe has been designed to do.

I’ve included links to Amazon where you can buy any of these axes – I’m intrigued to see if anyone buys a Bardiche!
Leave a comment below! Thanks.

Thank you for subscribing!